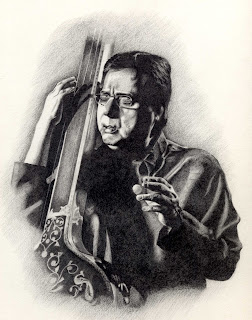 My father has been a lasting influence on how I and my siblings think, what we do and aspire. He isn't one of those expressive ones who would cuddle and would take us to play. That was Mummy's job. His way of showing love was talking about the studies, giving pat on the back when we did good and of course bashing up when we didn't raise up to the bar.

But there was one thing which bind him and me, even till today.

My Father had a childlike fanaticism about them (he is kinda grown up now). In 1970s , when buying music system in India wasn't as easy as buying groceries and wasn't as cheap as Rs. 4000;  he got it assembled, just to make sure that he gets to listen Ghazals on "just the right music system". He sat through all night in the recording shops, to get the live recordings of Ghazals on the cassette tape and spent lavish sum of his salary (by those standards) to get those tapes.

I grew up listening those Ghazals and understanding nuances of them, from him. He painstakingly spent a lot of time with me, explaining difference between Ghazal and Nazm; Makta and Matla.

Whenever Ghazals were played in our house, we connected. We became more than just tough-to-express dad and obedient son. We were friends then. I still remember him playing the tune of those ghazals on his knuckles. I have never heard someone doing something so magical.

He of course made sure that we listened to every one, from Gulam Ali, Ustad Mehdi Hassan, Begum Akhtar to Ustad Nusrat Fateh Ali Khan.

But his favorite was always Jagjit Singh. He always talked about how his voice has transformed with his age and how he has transformed and kept Ghazals alive in India. We mourned in his loss, when he lost his young and only son.

Jagjit Singh was someone who brought my father and me even closer, when he was working away from home 6 days a week and then when I was in Himachal, Chennai and then Bangalore for my studies and job, since he was someone about whom we both were passionate and love talking about.

Today morning, when I got to know early in the morning about Jagjit Singh's demise from my wife's Facebook Post (who is also his big fan), it didn't sink in for a while. And when it did, first thing I did was to call my father.


My old-fashioned restraint father, who perhaps believe that showing emotions is a sign of weakness, went silent for few seconds and then with deep sadness in his voice (which I have only heard once), said, "I was praying for him all these days. There is no substitute for him. ऐसे लोग विरले ही पैदा होते हैं !"

I am grateful to you, Jagjit Singh Ji for giving us beautiful soulful Ghazals, and to me this irreplaceable connection with my father!
Begum Akhtar Eulogy Father Gulam Ali jagjit singh Ustad Mehdi Hassan Ustad Nusrat Fateh Ali Khan