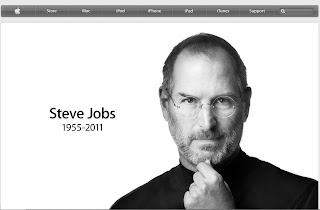 Last month, when I wrote a post about Steve Jobs, his famous Stanford Commencement Speech and Karma; little did I realize that I am going to write another post about him so soon, and not for all the right reasons.

He is no more and his passing away has made even the President of United States comment about how Jobs was "bold enough to believe he could change the world, and talented enough to do it". Surely he was.

He first changed the way people publish content, by working with Adobe. People only talk about their conflict, in the light of iPad not using Flash. Rarely do they talk about what they both together did to publishing industry. I believe his second biggest contribution was to change the way people see music. Sony had already started this revolution, but it was Jobs and Ive and iPod, who drove it from inflection point.

Now there is nothing else which has not already been written about him, post his death. But having said that, there is one thing which was bothering me since he passed away - his Legacy.

With legacy, I don't refer to the changes which he brought about and which will be talked over for perhaps another 100 years. With legacy, I mean Apple There are theories, of course, (which I partially subscribed to) on how Apple can be and will be saved. But at the end of the day, they are al theories. Apple was Steve Jobs and Steve Jobs was Apple - at least to the people. What kept bothering me, that could the "genius" Jobs not figure out that he would need to pass on his vision. That he would have to create not just products in his life time, but an organisation, which keeps churning products based on his vision.

The answer came where I least expected it - at a Tibetan restaurant. In the hindsight, it seems almost prophetic, considering Jobs was a Buddhist. I was having lunch with 2 of my colleagues/friends, when I raised this and  one of them said. "May be he didn't leave a vision to follow because he didn't want to". And that hit me!

May be, that is the reason. It's not always easy to make people see the world the way you see.
Then why spend your last days in passing on something which is truly impossible to emulate. Damn, he could see Macintosh even when it was not built. So how do you pass this vision and legacy? All you can hope is that the people after you would run well, what you have left and carried all throughout on your shoulders. It's tough to say what Jobs was thinking when he did that, but may be....

As a parting thought I will leave you with my favorite video of his (it's not Standford speech); where he talks about the Product strategy of Apple. It is 1997 and he is talking about iPhone and iCloud (conceptually). Now how do you pass that legacy!