Who will buy when you die? 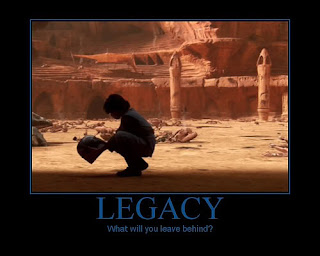 Steve Jobs did it by building Apple aficionados. Marc Andreessen did that with Netscape when he forced people to look web browsing as an entertaining experience and not just "a geek activity". Sean Parker,  Shawn Fanning and John Fanning did it with Napster when they changed the way people look at the music. They all are/were great product guys who knew what the tribe wanted even before the tribe had laid eyes on their products. They didn't do the focus group studies or market research to know the viability of their idea. They didn't show the stakeholders, mocks of their products so that they can "fill in the blanks".

But is that the only way to leave the product legacy?

I don't think so.

Google products , passes through at least 3000 eyes, before they get released even for the Beta. Agree, their hit rate is low but that is because they churn products dime a dozen, an evidence of their agile environment - one of the most important aspect when it comes to an evolving product. Gillette, gobbles up its own products, by improving them using a billion dollar research budget, which draws most of its start from the usability research done using current products.

So the key is not whether you use market research or not. The key, is whether we want to build a legacy, a tribe which lives beyond us - which buys/uses our products - products which live beyond their age and get talked about long after they die (or we die), just because they have changed people, somewhere deep, in a way that can't be erased, replaced or bought over by a competitor.
Apple Gillette Google Legacy Marc Andreessen Napster Netscape product product manager Sean Parker Steve Jobs tribe

Sqiar said…
Thanks a lot for sharing this with all folks you really recognise what you are talking about! In this complex environment business need to present there company data in meaningful way.So user easily understand it .Sqiar (http://www.sqiar.com/) which is in UK,provide services like Tableau and Data Warehousing etc .In these services sqiar experts convert company data into meaningful way.
February 2, 2014 at 1:17 PM